Cova da Moura is a neighbourhood in Amadora, a city in the metropolitan area of Lissabon (Portugal). Known today for housing between 5000 and 10,000 people, mostly of African origin (75% from Cape Verde while others are from Angola, Moçambique and Guineé-Bissau), Cova da Moura has been home to rural and foreign immigrants since the 1940’s when the first informal settlements on private land were erected. From the end of the Portuguese colonial era (mid 70s), more returned Portuguese and African immigrants moved in. They started building up the hood and today it is an area where the population has had a big impact on the geography. 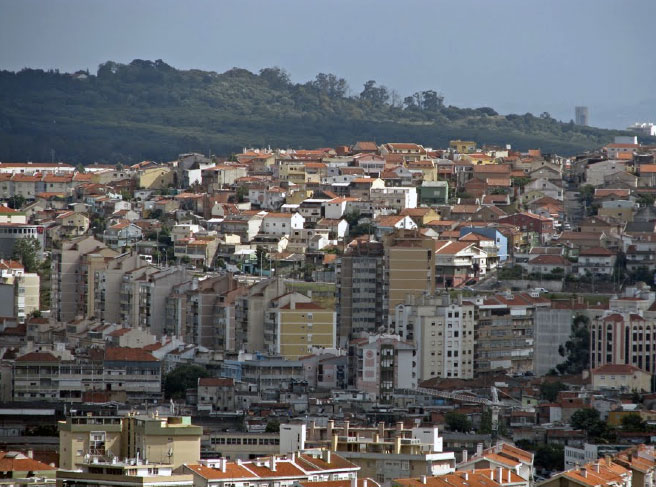 The southern side of Cova da Moura, also called ‘bairro africano’ (‘African hood’) has been constructed more spontaneously than the other side, resulting in a labyrinth-like town. Cova da Moura has a bit of a bad reputation, being called a slum by some Portuguese (many of whom have never been there) as the streets are associated with social issues, unemployment, drug abuse and gang violence. Watch this Al Jazeera report on Cova da Moura:

Representing Cova da Moura in the video on top of this page are emcees Ridel, Dani, Puto G and Nico OG from the group Kova M. The video to their single ‘Fronta’ did pretty well without any label or promo company behind it, gathering half a million views in the 3 months since it was posted on Youtube. The lyrics are in Criol (check out the video on Youtube to Google-translate the lyrics).

Other work by Kova M members can be found on Youtube too: Sexta Feira (audio only), Fuga di Street (with more views from the barrio), Txekanu li di baxo. Also check out the Soundcloud of beatmakers Katana Producoes for more Afro Portuguese hip hop.

There has been talk of demolishing the neighbourhood, replacing the informal settings with planned housing – since Cova da Moura is built on valuable plots – but there has been strong resistence from its inhabitants, who have rooted there. Take a look at this page for a photo report of Kola San Jon, a celebration held in Cova da Moura.