If you’re familiar with UK hip hop, chances are that you own some of Richy Pitch’s albums and EPs. The London based dj/producer, who has been a regular on the UK scene since the mid 90s and who dropped classics like the Live at Home EP, moved to Accra (Ghana) in 2007. In the following two years he landed some dj gigs and recorded an entire album in collaboration with some of Ghana’s best contemporary artists.

‘Ye Fre Mi Richy Pitch‘, released in August on BBE records, is more than a compilation of hip hop tracks as Richy and guests maneuver between hiplife and highlife, afrobeat, soul and more. Since its release, the album has already functioned as a launching pad for some of the talent, and the first single & video ‘Black star’ featuring M.anifest did very well on the web.

Africanhiphop.com connected with Richy to find out more about the man & his music in ten questions.

As a producer, had you previously been looking at African music as a source of inspiration?
I have been influenced by African music for quite some time. I had a few 7″‘s and LP’s by African Artists such as Fela and Femi Kuti, Manu Dibango, Mulatu Astatke and Tony Allen. I love afrobeat particularly from the 60’s and 70’s. But I certainly needed to learn more and I became a big a fan of highlife once I was introduced to more in Ghana. As a producer I had mainly concentrated on US/UK inspired hip hop, jazz, funk and soul music before this LP, but living in Ghana really influenced me and inspired me to listen and re-create more afro-inspired beats, especially for this LP. It would not have worked any other way and I really enjoyed discovering and learning new rhythms, melodies and styles through the music I heard in Ghana.

What was your plan when you first came to stay in Accra with regards to recording with local artists?
When I first went to Accra, I didn’t really have a big musical plan, I went there to be with my partner, Natasha.  I did think it’d be good to work with some local artists in Accra and record an EP and find out more about the music scene. I didn’t realize how big the project would end up being. It took me nearly a year to find the right artists to work with, before that I was recording percussion with a friend called Michael Kweku Owusu from the Arts Centre. And then I met DJ Vadim in Islington and he told me about a girl who sang on his LP, Sena Dagadu (Who performs ‘Dey Craze’ with Wanlov the Kubolor on my LP) and Sena put me in touch with PY who ran a great Hip Hop night called ‘Bless The Mic’.

That’s where it all began! I started DJ’ing there (even taking my turntables to the gig) and in December 2007 I met Wanlov the Kubolor at his ‘Green Card’ LP launch and that’s where the conversations and collaborations began. Everything on this LP worked out even better than I expected, I was really pleased with the vocalists and musicians I  got to work with and I was really happy how my beats mixed appropriately with what they created. I was keen to make the beats sound authentic and fit in with the Ghanaian inspired music and vocals and perhaps add a little twist of what I do in the UK too.

How did the local hip hop / hiplife community welcome and accept you to work with them?
Oh, everyone was so welcoming and very keen to work with me, I was very lucky, I got to work with some big names and some very talented artists too.  See my website www.richypitch.com to find out more about the featured artists on this LP.

How did you set up the recording sessions for this project?
My recording studio was a spare bedroom in the flat I was living in, nothing special, I just had a Mac (which I bought on Ebay for £50 just before I went to Ghana), a good mic and a compressor. Considering the set up, the sound I got was very pleasing. I worked with artists one on one most of the time, unless it was a collaborative effort vocally and then artists would come in and write together. I also worked with M3NSA back in London (he lives 5 minutes down the road from me) on some of his songs from my LP and M.anifest recorded his vocals in America and uploaded the vocals for me to download. 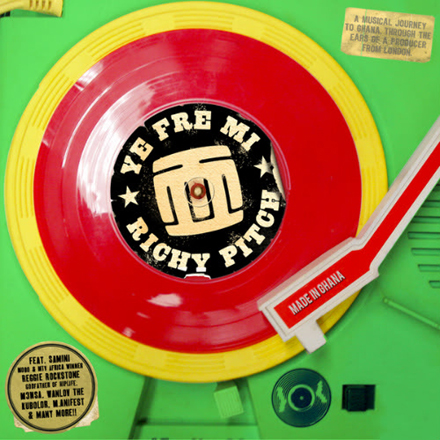 Is this album going to be released in Ghana?
Yes I hope to release the LP locally in Ghana, I’m currently looking into a number of ways to get it distributed properly. I hope the LP will have an impact over there, I think there’s certainly lots of songs on the LP that will do well in Ghana that have strong Ghanaian themes devised by the guest artists and hopefully some of the songs will come out as singles over there too. I know Yasmeen who sings the song ‘Dey Suffer’ is also looking to release that song over there to promote her own forthcoming LP. I’m also just about to distribute the video of Blackstar over there to TV companies too, so gradually people in Ghana will see and hear more things about this project.

How did the video to the 1st single come about?
The video for Blackstar was a really nice story. Last year I got an email from Tom Jackson, who produced the animation, he liked my music and contacted me to ask if he could use some of my music for a trailer of his animation work. I was more than happy to oblige! I also spoke to him about my new LP and we we also shared an admiration for ZX Spectrum computers (I used to write and sell my computer games when I was a teenager) . After speaking to Tom a number of times he offered to make the video for Blackstar and the rest is history!

The track has gone down really, really well, especially because of the video.  But it was a great combo pack of great lyrics from M.anifest, a cool vid from Tom and decent beats from me. The video’s had about 50,000 hits on the net and  recently the Gorillaz Soundsystem asked if they could use the video on their live sets, so I think there’s more exciting opportunities to come with the song ‘Blackstar’. As mentioned in the previous question myself and M.anifest put the song together via the internet. M3NSA encouraged M.anifest and I to work together and I’m really glad it happened.

Did you see any signs of the younger generation connecting with their heritage?
There are definitely producers in Ghana who take inspiration from the rich heritage of Highlife and Afrobeat etc. Producers such as M3NSA, Kweku Ananse, MA, DJ Juls and Kwame 1, have all taken inspiration from the original Ghana Sound. I’m sure there are other younger producers also doing that, but like many producers worldwide, a lot of people will knock out beats by emulating the current sound without really showing any love or understanding of what music was created in the past. I think it also has a lot to do with what you listen to and what you have available to you to make your music. But I think to be a good producer you have to listen to and appreciate and respect quality music that came before, whether it be Dr K Gyasi and the Noblekings, CK Mann, The African Brothers or Reggie Rockstone.

How has the initial response been to the album in UK, and internationally?
The response has been really nice, since the LP has been out I’ve had a lot of messages, some personally to me and some relayed to me from friends and the record labels from interesting countries all round the world,  people making gig enquiries and people telling me how much they enjoy listening to the project.  I’ve had messages from Europe, Africa, Japan, Australia and America. Yesterday, for example, I got a message from a musician in Israel who picked up the LP and I actually found out he was also a very good producer himself. (Idan K) So it’s definitely been positive and I’m sure it will continue as the CD becomes more available.

How do you see the future of African hip hop & urban music on an international level? Are we always going to be stuck in the world music section of the record stores?
I see it like any other music genre, if the music is good it will be well received on an international level too. The phrase ‘World Music’ is such a vague title for a genre and can cover far too much music from artists from many different parts of the world. World Music certainly doesn’t describe this LP. This LP is a combination Hip Hop, Hiplife, Afrobeat, Highlife, Soul and Electronica. It’s good music created by the guest aritsts and myself which is influenced by, and celebrates the music, languages and culture of Ghana. People should concentrate on making good music and try to forget about the people who pigeon hole music as ‘World Music’, that will always happen whether we like it or not.

What else can we expect in terms of promotion, video releases & touring around ‘Ye Fre Mi Richy Pitch’?
We will be releasing ‘Dey Suffer’ written and sung by Yasmeen very soon as a single, hopefully with some new remixes and I’m sure they’ll be more videos and singles from the project going into 2011. I will also be giving away some free music and mixes very, very soon to continue the interest in the LP and what I do and I will certainly be looking at doing more live shows with the project, involving not just the MC’s but hopefully some of the live musician’s such as Kwesi Dankwa and Gouda Traditional Music too.

Things keep coming in all the time, for example I’ve just done a show at the O2 with M3NSA which has Nneka and Samini headlining, at the beginning of November. I’ve also been very lucky to be involved with Damon Albarn’s Africa Express this year. That has been a great experience for myself, M3NSA, M.anifest and Wanlov collaborating with the likes of the Gorillaz, Tony Allen, Femi Kuti and Amadou and Mariam. So I’m sure there will be many more opportunities from the release of this LP which will help raise the profile of all the artists involved in this project, including myself.