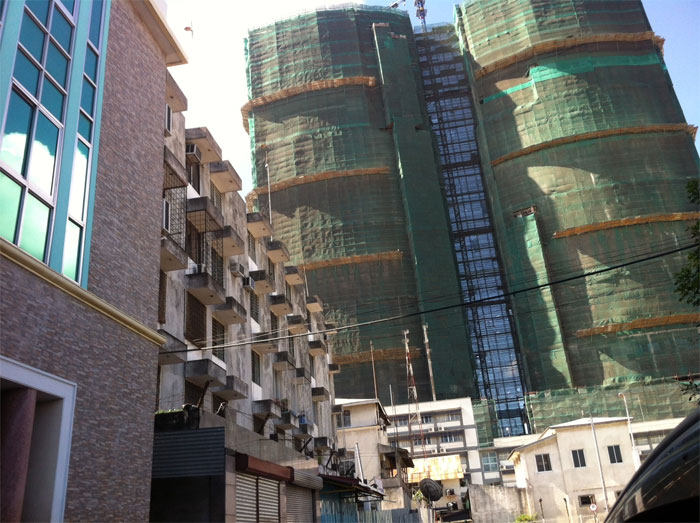 Pic: the fast changing city scape of Dar es Salaam, where the city is turning into a forest of high rise buildings (photo by J4)

African hip hop radio – broadcasting via the web since 1999 – is back with a double update, combining our shows recorded at Amsterdam’s Red Light Radio in May and June 2013. Three hours of fresh tunes and classics, some new hits and underground gems from Tanzania, cross continent collabos like Fecko’s ‘Real African poetry 2.0’, rare grooves from Somalia and Cape Verde, and a track suggesting that Kanye West’s contribution to the new D’Banj album might be more appealing than his entire new album ‘Yeezus’. Anyone speak Swag-hili out there?**

In the May show, presenter Amal was joined in the studio by her brother Ash (L’Afrique Som Systeme, Collectcurate) and went on a beats excursion through the periphery of African hip hop. Meanwhile J4 was in Tanzania, so when he came back for the June episode he brought a bag containing some of Tanzania’s current radio hits as well as a few underground gems. Sadly, several artists passed away in recent months, starting with 100+ year old taarab legend bi Kidude who once featured on a Fid Q track; she passed away in Zanzibar in April after an illness.

Then in April, one of Bongo Flava’s biggest stars Ngwair died quite unexpectedly after a show in South Africa, apparently from a drug and alcohol overdose – it was rumoured that thieves had spiked his drink with the aim of robbing him, as his friend, nicknamed M to the P, also nearly died that same night. His family received much support from the urban music community in Tanzania in retrieving his body and organizing the funeral. In May, one of Dar es Salaam’s brightest hip hop emcees, Langa, passed away after a short illness caused by malaria. In recent times, Langa, who first rose to fame with his group Wakilisha that won a Coca Cola contest in 2004, had been known to create awareness among Tanzania’s youth about the hazards of hard drug abuse, and he was working to establish a rehab center in Dar, styled after the Sober Houses found on Zanzibar. Certainly these deaths are a big blow to the hip hop community, even more so by those who were fortunate to have known all of these artists personally. Rest in Peace Bi Kidude, Ngwair and Langa!

Other new tracks in the June show include the new single ‘Hakuna matata’ by member of parliament Sugu (Joseph Mbilinyi), a collabo by AY and Fid Q, the posse cut by Kinondoni based Bob Click, lyrical ambassador Tony Blackman’s project Rhyme Like a Girl and a new tune from Blitz the Ambassador’s Afropolitan Dreams album. Bear with us in the intro, one studio mic was bugging so J4’s vocal dropped out of the mix…

Playlist May 2013 is unfortunately not available. If you want to know the name of a specific track, just tag it on the Soundcloud timeline and we’ll do our best to identify.

**Oh, and the name ‘Kanye’ according to some may originate in Swahili, but according to what we know the literal translation of ‘kanye’ is sort of a dirty word.