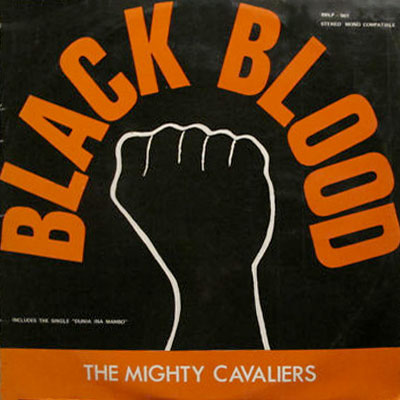 Photo: Kenyan rare grooves by the Mighty Cavaliers (anyone who can help us to a copy on vinyl, let us know)

The sun is out in Europe and Amsterdam’s red light district is slowly melting away, covered by a thick layer of weed smoke and British sex tourists’ vaporized sweat. Inside the Red Light Radio studios, behind the glass of a former prostitution window the African hip hop radio team is gathering for another two hours of heavy tracks from all over the continent. Red Light Radio has invested in new cd turntables which allow Amal and J4 to connect their hard disk filled with new music and African hip hop classics from the past fifteen-plus years.

So you get an idea of what the July / early August edition of African hip hop radio sounds like. Highlights on the playlist include the original to Just a Band’s ‘Dunia ina mambo’, the track by the same name from an obscure 70s Kenyan record by Cavaliers Band (see below for the video of the Just a Band cover); another rare groove from 70s Congo by Orchestre Kouloukoko du Zaire, an early and often overlooked Tanzanian hip hop classic ‘Kila siku kila mwaka’ by the Deplowmatz (the group featuring Balozi Dola Soul & Saigon), some serious lyricism from Lagos by Boogey and another Naija track by Modenine and XYZ, the boombox anthem ‘Hood Superstar’ by Tanzanians Shanta and Lord Eyez, and a new tune by Congolese-American-South African resident Alec Lomami. In addition, we play several tracks that were sent in by Africanhiphop.com regulars.

In other news, we have combined all previous African hip hop radio shows recorded at Red Light Radio into one playlist which you can listen to below. Bookmark if you want to keep track of all our upcoming shows, and check back soon for another new show.