In the past fifteen years we have come across a growing number of students and scholars researching the hip hop scene in an African country of choice – even the Africanhiphop.com website resulted from the wish of sharing research back in 1997. While their work usually culminated in a thesis, video documentary or a published article, more often than not the final product was entirely unavailable to the African hip hop community and the people who had been interviewed.

Imagine the excitement when we heard about the newly published ‘Native Tongues: an African hip hop reader‘, a collection of essays written by scholars from the USA, Europe and Africa, available worldwide through Africa World Press. The essays were collected and edited by a hip hop head in academia: Paul Khalil Saucier, Director of Africana Studies and Assistant Professor of Sociology at Rhode Island College (USA). Time for a talk with the editor about the thinking behind this volume. 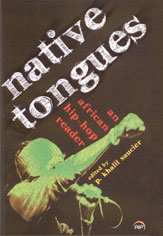 How did this book come together? And what has been your role in the creation?

Originally I thought that a book similar to Native Tongues: An African Hip-Hop Reader would have come out a long time ago.  I really believed that with the success of Tony Mitchell’s Global Noise: Rap and Hip Hop Outside the United States (2002) and the then steady flow of articles on Tanzanian and South African hip-hop thereafter, that someone would have compiled an edited volume on African hip-hop. So when I was in graduate school, I said to myself that if no one publishes a book on African hip-hop before I graduate, then I would take up the task of editing such a volume.  Surprisingly, no one did, but I was hesitant, that is until I saw the publication of Raquel Rivera, Wayne Marshall, and Debbie Pacini Hernandez’s book Reggaeton (2009). At that moment, I decided to move forward with the project, contacted Africa World Press and put out a call for chapters. I received several submissions within a short period of time; some of which made it into the reader.

In regards to my role, it was twofold, that is, as curator and editor.  However, my original intention was also to contribute a chapter on Cape Verdean hip-hop, but that didn’t happen, largely because getting people to write chapters and editing said chapters took up a great deal of time; it took up more time than I ever imagined.

Is your own interest in ‘African hip hop’ (and hip hop culture in general) purely academic or do you also enjoy the music & culture in your free time?

My interest in hip-hop extends well beyond the academy.  I grew up b-boying and listening to rap music. Hip-hop music was the soundtrack to my youthful years, particularly the music of X-Clan, A Tribe Called Quest, De la Soul, Brand Nubian, Diamond D, Lord Finesse, Poor Righteous Teachers, YZ, Erik B. and Rakim and many others. Although I’m not as incessant about keeping up with the latest hip-hop acts of today, rap music can still be heard from my car, living room, and even from my office on campus. For instance, the group Milk, Coffee, and Sugar from France has been in heavy rotation for the last month or so. In fact, while I’m waiting to start my classes, rap music, old or new, is often piped out the classroom speakers for all my students to enjoy and learn from; I intentionally chose songs that serve as preludes to topics discussed in class. In short, it was/is my love of hip-hop that was the original stimulus for this project, that is, it simply did not emerge out of a need, as I mentioned earlier, to address an often neglected area in hip-hop studies.

My relationship to African hip-hop specifically is a bit more academic. Despite being the editor/curator of this project on African hip-hop, I listen to very little of it.  There was a moment when I was listening to a good deal of Senegalese and Cape Verdean hip-hop, but that time has passed. Although, not too long ago Adam Haupt, author of Stealing Empire, gave me some Afrikaans hip-hop.  Despite not knowing a word of Afrikaans, the flow and the beats kept me interested for a couple of months.  Then again, I am a big fan of Blitz the Ambassador and others.

From your experience, has the discourse on hip hop in the academic world found a place where it’s being taken serious and where you get enough support to dedicate your time?

I would say things have become better, but people still view such research as gimmicky and as something that one does in their spare time. In other words, hip-hop is often seen as secondary to “serious” scholarship.  This is something I confronted. Ironically, I put off another book project, a project that would be viewed as “serious” scholarship, in order to complete Native Tongues. I also think that this less-than hospitable attitude toward hip-hop scholarship is a result of the superficial nature of much of the scholarship. Overall, there are more books and conferences than ever before as there is journal space dedicated to things hip-hop. No doubt the field is growing, but I’m not really sure if this signals a more hospitable environment or if this is the result of something else.  Regardless, hip-hop will have greater stability and support in the academy when more people from the hip-hop generation become academics.

In what way does this body of work – and research on African hip hop in general – contribute & add insights to the broader discussion on popular culture?

I think African hip-hop tests ideas about modernity and tradition, for hip-hop in Africa is the effect of the modern and the global, but also the colonial, indigenous, and local.  In other words, despite being a modern invention, hip-hop in Africa illustrates the intertwining and tensions of modernity with tradition.  Further, I think this book makes a significant contribution to our understanding of how young people are forging new relationships in “post-colonial” Africa.

It is still very much dominated by European and North American scholars.  However, a couple of the authors are from the continent, but are studying in Europe. The domination of European and American scholars on the subject, I think, is one of the reasons why there was so much overlap in subject matter when I was soliciting material for the book.  Originally, I thought I would get an onslaught of material on Ugandan, Congolese, Nigerian, Algerian, and Moroccan hip-hop. I thought this would be the case simply because the study of African hip-hop had matured to such a diverse level.

Instead, I received a substantial amount on Tanzanian, South African and Senegalese hip-hop. Many of the essays were saying similar things. In my estimation, foreign scholars tend to gravitate towards more popular areas in Africa and by extension our understanding of hip-hop in Africa is severally limited. To this end, I should be clear, Native Tongues is not to serve as the definitive word on African hip-hop. In fact, this is exactly why it is not “The African Hip-Hop Reader, but “An African Hip-Hop Reader.” My hope is that it simply stimulates more research on the continent.

Do you see enough ground to use the phrase ‘African hip hop’? One could argue that writing about Cape Verde and South African hip hop in one book is like trying to find a link between Chinese and Russian hip hop because these nations are so far apart geographically, culturally, linguistically etc. Are there significant connections and common grounds to be distilled from the various entries in your book?

This is an excellent question, for it was something I struggled with initially, but ultimately I concluded it was the best way to frame the project.  Upon further reflection I also came to see it as no different than hip-hop in the US.  For instance, each region in the US has different cultural and linguistic styles.  Yet, they all tend to coalesce around certain themes and issues of pain and pleasure, youth empowerment, hypermaterialism, etc. The same can be said about hip-hop in Africa.

These connections and common grounds are not only found intramurally, that is within Africa, but also globally. For instance, even the simplest and most banal of hip-hop cultural forms like the cipher and hand gestures transcend regional and linguistic boundaries. Also, I think the idea of “African hip-hop” begs the question, “where is Africa?” The book while clearly illustrating, implicitly and explicitly, the similarities and connectivity of hip-hop on the motherland also attempts in some ways to answer this very question of the stretching boundaries of Africa.

How will the book be distributed? Do you expect students & hip hop heads in Africa to be able to get a copy?

The book is easily accessible. It can be found at many bookstores throughout Africa, Europe, and North America, for the publisher, Africa World Press has multiple distribution sites throughout said regions of the world.  It can also be ordered online through the publisher’s website and through Amazon.com. Further, it is only available in paperback, thus making it more affordable than a hardback.

Do you expect academic work to benefit the professional development of the artists in any way?

At the very least, I think academic work can bring greater visibility to the artists written about in academic texts.  For example, while curating this project, I was introduced to several artists I was not familiar with and as a result have sought out their work since they were brought to my attention. Further, I also think this question assumes that academic work and hip-hop artistry are separate entities and not dialogical. As my good friend and hip-hop scholar Murray Forman has always stated, hip-hop studies is hip-hop. To paraphrase him, the boundaries between the shantytowns and the academy are narrowing each and every day.