Mixtape Release: World Hip Hop Women – From The Sound Up 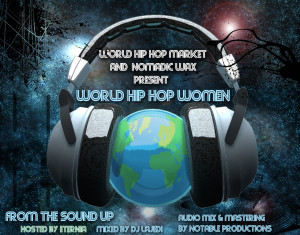 Hip Hop Culture is nearing its fourth decade of existence. Throughout those 40 years, main stream hip hop music has tended to be male dominated, with some notable exceptions. Despite what we might see on the surface, the hip hop community is in fact filled with amazing female artists from all over. If you are asking “where are all the female MCs at?”, then you just aren’t looking.

World Hip Hop Women: From The Sound Up is the latest mixtape project from Nomadic Wax and World Hip Hop Market. The brainchild of Detroit’s DJ LaJedi and World Hip Hop Market founder Greg Schick, the new mixtape seeks to highlight the female voices and causes that are always present but less often heard. Featuring artists from 15 countries, the project joins Iranian MCs living in Washington, DC, to Zimbabwean artists in the “Sunshine City”, Harare. It celebrates both Cuban heritage and the Palestinian struggle together, alongside exclusive Spanish dancehall, and new dubstep sounds of South Africa.  World Hip Hop Women are fierce emcees spittin’ bars that transcend language barriers, cultural differences, and gender bias, expertly mixed together by DJ LaJedi, sound provider for Detroit legend One Be Lo, an Official Starfleet DJ and founding member of The Foundation of 5E Gallery.

“I salute every artist who contributed to the mixtape,” said LaJedi, “for their courage and commitment to the spirit of creativity.  Many of these women are carving paths where there are none.  They embody ‘firsts’ of all kinds:  MC Black Bird – first female to release a hip hop record in Zimbabwe; Soultana – member of Tigress Flow, first all-female hip hop crew in Morocco; Masia One – first female to be nominated for Canada’s Much Music Award; Shadia Mansour – The First Lady of Arab Hip Hop; MC Melodee – Holland’s leading Lady in Hip Hop; DJ Naida – Zimbabwe’s #1 female DJ, EmpresS *1 is Egypt’s First Female Egyptian Rapper and on and on.  They are assuming leadership roles in their native communities and beyond through endeavors that prove their conscious attitudes regarding love, truth, peace, freedom of expression and social justice.”

The project is hosted by one of North America’s leading female voices: Toronto’s Eternia. Eternia has been a frequent collaborator with Nomadic Wax and World Hip Hop Market, so it was natural that she be the voice ushering listeners through their global journey. According to E in her track “The BBQ Remix”, “We offer you an alternative, all feminine, all-star representative, all perspective, all nation, the global champion, call it the reckoning, all elements, all natural, it’s effortless.”

The intention of the collaborative effort of World Hip Hop Women: From The Sound Up is to inspire cross-cultural collaborations with opportunities for awareness, growth, and understanding. Mixtape contributor Soultana from Morocco sums up the project well: “I will be happy if all Arab girls try to write about something they feel or experience…And why not have a new generation of Arab femcee’s? ‘Cuz ‘til now, the girls are shy and they don’t have the courage to be a rapper or to express themselves in music. So I believe that WHHW will be a bridge to a new world where Arab women and girls to be a part of it.”

LaJedi added, “You will hear nothing but strong, insightful verses. The sounds are native to locations on opposite ends of the globe, and yet the sonic journey will be familiar to anyone who has a heart for great music.  Whether you understand the language or tonal origin of any song in the mix, the flow will guide the expansion of your mind and the movement of your body!”

The mixtape is available for free download at http://nomadicwax.bandcamp.com/track/world-hip-hop-women-from-the-sound-up