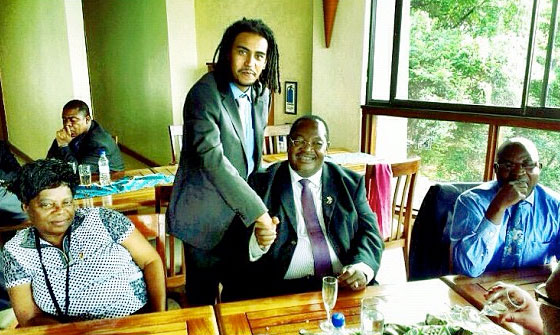 Herbert Schwamborn a.k.a Metaphysics is credited for being one of the pioneers of hip hop in Zimbabwe. Based in Germany and with frequent visits back to the motherland, last month he was at a diamond conference held  at the Victoria falls in Zimbabwe. For those not acquainted with the MC, there is a short bio below.  In the videos below he talks about his transition from being an artist to an activist, and gives an insight on what the conference was all about.

Born on the 8th of December 1973 in Mbare, Harare, Zimbabwe, to a German father and a Zimbabwean mother, Metaphysics is one of Africa’s most well known MC’s. Having formed his first rap crew in 1985 together with Tel a Ryme, the group was known as Lethal Language, and had even been featured in The Source.Magazine’s Unsigned Hype section in 1989. The two parted ways and Metaphysics (then known as Qwela tha Brainchild) initiated Zimbabwe’s first well known afro hip-hop group A Peace Of Ebony in 1991, along with fellow rapper Tony Chihota, Producer Keith Farquharson and Singer/Songstress Chiwoniso Maraire.

Their classic debut album “From the Native Tongue” was released in 1992 and featued P.O.E. rapping and singing in both Shona and English. Their sophomore release “Vadzimu-Putumayo” followed in 1994. The group featured additional members Tendai Vicki and George Phiri with whom they went on to tour southern Africa, including a performance in Madagascar. P.O.E. parted ways upon returning from Madagascar, with Metaphysics and Tendai (a.k.a. Akibuhlan) remaining a duo known as Kataklizim.

Kataklizim released their self-tited debut in Zimbabwe in 1996. The first single to the album “Night N Day” was well received and the video got played on Channel O. That same year Metaphysics relocated to Johannesburg, South Africa, where he hosted M-Net’s Shell Road to Fame Talent Show and helped shape the infrastructure for the underground rap scene that is there now.

1998 saw Metaphysics relocate to New York City. Finding work as a camera man for MTV’s teen-show TRL and rhyming at Hip-Hop events and in cyphers around the city. It was here that he took on the alias Metaphysics. He left NY that same year moving to San Fransisco for the remaining 6 months of his stay in the U.S. to experience the west coast. The expiration of his visa saw Metaphysics relocate once more, this time to Cologne, Germany.

Shortly upon his arrival in Cologne, Metaphysics released his first solo effort “On The Run” on Mehrwert Records in 1999. It was followed by the release of “The Disk” on Four Music which featured Clueso, and was produced by DJ Chestnut. Having recorded numerous songs with Chestnut, some of which saw the light of day on compilations, he joined Mellowbag in 2000, and the single “Day to Day” appeared on the soundtrack to the german movie “Kanak Attack”. Meta left Mellowbag the following year, teaming up with former P.O.E. member George Phiri and DJ Iron Ive to form the group known as Migrant Souls. He got involved with the Brothers Keepers project in 2001, as well as get down with a crew called FTC (a loose click of MC’s from the Cologne rap scene).

2002 saw the release of his solo E.P. “Elevated Perception” on S.w.a.m.p. Records, as well as Migrant Souls “The Foundation E.P.” on Pyramid Music. His debut album “Digital Garden was released on the same label the following year. Having been featured on Söhne Mannheims release “Zion”, and Migrant Souls opening for the band on their Tour, Metaphysics became a member of the group, and contributed to their sophomore effort “Noiz”.

Currently residing in Wuppertal, Germany, Metaphysics has since went on to work with the likes of Maybach Music, SODMG, Slum Village, Inspectah Deck, Bukue One, Defisis, Buju Banton and Mr. Vegas as well as numerous guest appearances on albums and compilations.

Watch these videos in which Metaphysics talks diamonds (pic on top of this article was taken at the conference, the guy shaking hands is dr. Obert Mpofu, Zimbabwe’s minister of Mines and Mining Development)

For more on Metaphysics check out his official website. ( http://www.rs-gems.com/ )