Kalamashaka back in the studio

The wise say: you want to get to the uncut truth, then enquire from the tongues responsible, that way u get the unedited script, the story as it is… Don’t depend on hear say, go all the way. That’s what Live with Shenzy is about: getting to the bottom of it all, leaving not even one stone unturned.

On this episode of my show I am taking you to the essence of Kenyan hip hop and hang out with the legends, the Godfathers, the pioneers. Ask any soul familiar with Kenya’s music and the name Kalamashaka comes first on the list. So when Ambrose Akwambi aka Dunga of Mandugu Digital invited me to one of their recording sessions, it was more than a honour.

Catch this audio interview (in Swahili/Sheng) as Kamaa enlightens us on what Kalamashaka have been up to:
[audio:mcshenzy-kshaka.mp3]

Word from Shenzy: I get to the studio, it’s about 8pm… everybody laid back, no pressure. Kamaa is sitting on a couch, Ambrose on the Pro Tools, hands on the piano. This same piano produced the smashing hits by Kalamashaka featuring Dead Prez and Loon featuring Nako 2 Nako, just to name a few successful works of his. This guy has been producing for a minute and the ill beats can prove that. Surely one of the most sort after producers in East Africa, think of it this way, Premo and New York, that’s how big this producer is.

Two hours down and the recording session is out, everybody is relaxed now. Ambrose samples the album he’s working on with Kamaa and damn… damn… this thing is dope dope as hell. Kamaa tells me he already decided on a title: Githingithia, that’s Kikuyu for the shaker and when he started he used to go by that alias. The question is: why an album almost 12 years later? He tells me the this is just a solo project and concurrently they are working on an album as Kalamashaka with Ken Ring –  he is the producer responsible for the smashing classic Fanya Mambo, a half Kenyan based in Stockholm, Sweden. He has worked with M.O.P, D12 and Morgan Heritage, just to mention a few and we can loudly say this guy is one of the biggest producers in Scandinavia.

So next I contact Mr Ken, he tells me: yeah, the Kalamashaka album should be droppin before December this year and we should expect Sean Price, Saigon, Dead Prez and more surprises on the album. True to his word he sends me an exclusive Kalamashaka song featuring Saigon. Wow… Kalamashaka just like the ol’days: heavy, straight on point.

Just to try to understand how big Kalamashaka were, I did some research and on the archives I come across this article written in 1998:

“Formed in 1995, Kalamashaka is currently the talk of Nairobi. The Swahili rap trio are a crowd puller with most of their shows filled to capacity. With their blend of Swahil/English rhymes touching on day to day life in Nairobi, Kalamashaka are bound to keep the crowds rockin’. They burst into the scene with their debut hit single “Tafsiri Hii” that came with mass appeal and received favourable air time on all radio stations nationwide. For the first time, Nairobians finally found music they loved and could relate to from one of their own. On stage, Kalamashaka clad in sporty outfits designed by Fundi Frank take little time to prove that they are on a whole new level, with captivating lyrics that drives the crowd wild but still gets the message across.

After all the success, Nairobians were left wondering if Kshaka would be able to release another smasher like Tafsiri Hii. Well, not only were they able to reach those standards, but they went a step further proving that they are truely Kenya’s rap group to be reckoned with.
This time they released a track titled ‘Songa Hapa’ which rapidly rose to the No. 1 position on the Charts and holding this position for a number of weeks. Once again, Nairobians were not humming to Tupac’s “Wonder if Heavens Got a Ghetto”, or biggies “Hypnotized” but they all seemed to be rhyming to the opening lines of songa hapa: “Umeniattract vile microphone you attract Mc’s… “ 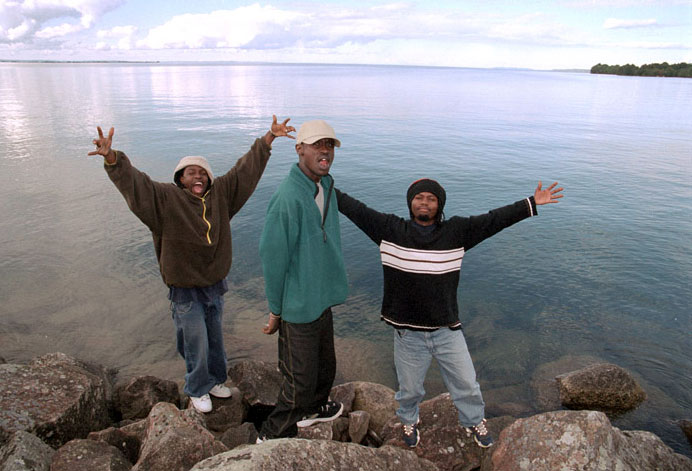 Kalamashaka was formed before 1995. Back then the group went by the stage name 3D (Three from Dandora). They all resided in Dandora (one of Kenya’s biggest dumping sites, it’s a ghetto, more like Kenya’s Harlem). ‘Kala’ is swahili for ‘ate’ while ‘Mashaka’ means ‘trouble’. Their music is revolutionary, surviving in Dandora, a neighbourhood full of crime, drugs, police brutality, murders, gangs: you’ve seen it all. You know the tale too well. Their music is inspired by this stuff, they talk on day to day lives of common people, struggles, hustles in the ghetto not just in Kenya but everywhere in the world, being broke.

At one point no producer wanted to produce their music because of political repercussions as at the time Kenya had a tyranical government. This resulted to them going to neighbouring tanzania where the single Moto was produced. In late 90’s they shifted base to Sweden where more tracks and an album that was never released was produced by Ken Ring. One single from the projekt was very succesful and this placed them on the world’s hiphop map. It’s on record that at one of their shows in Nigeria with Channel O, 60.000 fans were present. They continue to be respected on the Kenyan hip hop scene and remain timeless and their works inspired lots of ghetto youth in Kenya, helped shape musical careers of many like yours truly. Long live Kalamashaka. Also check out the Kalamashaka Wikipedia page for biographical info.