If Die Antwoord were real, this is what their video would look like

The music video for ‘Oemtjokitie’ by Doodvenootskap was shot in the South African city that tops all the world travel recommendation charts – Telegraph Travel Awards, NY Times’ 52 Places to go in 2014, Lonely Planet’s Best in Travel 2014 and so on. Where do all these people go? Many visitors stick close to the Table Mountain, and few ever get to explore the Lavender Hill or Steenberg, the parts of town Doodvenootskap is representing in this video.

With more than an eye wink to gangster culture, it’s a reminder that Cape Town is a city that ‘works for a few’ (as the Tokolos artwork below illustrates) while a majority – and many of those living on the Cape Flats – do not benefit equally from Cape Town’s status as one of the world’s greatest cities. 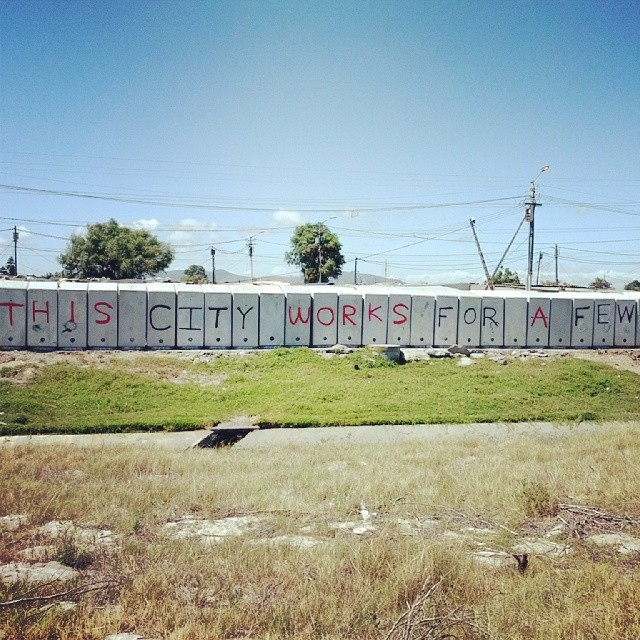 The DoodVenootSkap video was apparently inspired by Terror MC’s ‘Liberate yourself‘ (2008), one of the first Afrikaans language hip hop videos that portrayed some of the people living in Ravensmead and other townships around Cape Town. Terror MC has a new album coming out, if you want to hear some of his new tracks check out the last three episodes of African hip hop radio.

Meanwhile, Die Antwoord have also positioned several of their videos in the Cape townships, but the difference with Doodvenootskap and Terror MC is that Die Antwoord neither live in, nor come from these neighbourhoods (instead, they come from the affluent and largely white part of Cape Town with an unemployment rate of 2%), and they have been accused of merely borrowing the backdrop and some of the people living there rocking prison tattoos to create the hip hop equivalent of poverty porn. Of course we can ask ourselves the question whether videos like ‘Oemtjokitie’ are fundamentally different in that respect, but for a large part of this word’s greatest city, what you see in this video is part of their every day reality.

DoodVenootSkap have recorded several tracks and a mixtape ‘Skolly hood’, check them out on Soundcloud.