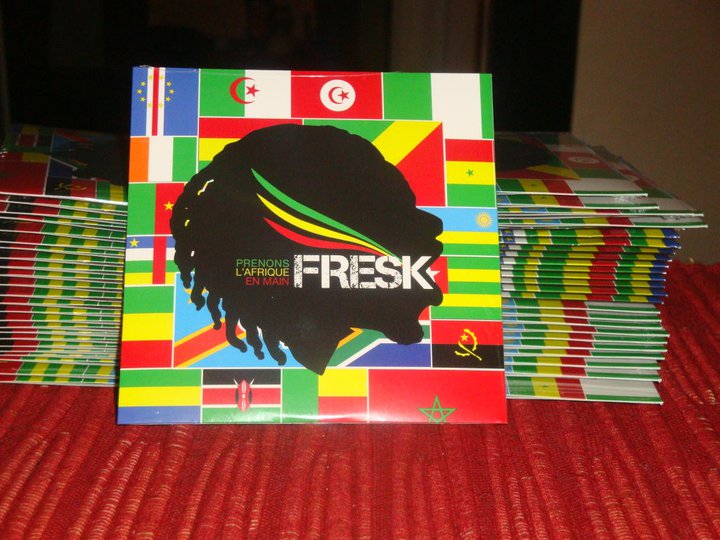 Fans of Fredy Massamba have had a good year as in 2010 the short singer with the big voice from Congo-Brazza was all over, releasing a solo album, performing with Congo Groove (including a gig at our own Doin’ it in the Park) and performing with his own band.

Then, Fredy is also part of FRESK together with Steve Mavoungou and Pluma. The band has just released a new music video for the single & free download ‘Prenons l’Afrique en main’ (‘Let’s take Africa in our hand’), an infectious reggae tune with conscious lyrics. The location of the shoot must have been crowded because in 4 minutes, besides our FRESK heroes, we see Marie Daulne (Zap Mama), Baloji, Béa Diallo, Pitcho, Gandhi, Lexxus Legal, Movaizhaleine and Daara J Family stopping by.
[youtube width=”640″ height=”385″]http://www.youtube.com/watch?v=5cnl6fu61bs[/youtube]

The song is also available as a free download here.

The group was kind enough to translate the lyrics for us:

Our people lasts still enchained, a past loses blood
Each day of this people is to broke centuries of chains
Let’s unify our strengths in the name of our sovereign liberty
They stole us our history to better corrupt us
Some even say: the black man is not entered in the history

Enough massacres, genocides, fratricide wars
Enough blows of state and accomplice heads of state,
Corrupted politics that murders
Enough conquistadors (conqueror), moderns slave-drivers
Stop the traffics of organs masked under actions of NGO
Stop persuading us that Africa is poor
While her wealth’s could reconstruct all the universe,
Sh..(shit) of their conflicts of interest in our lands
Diving voluntarily innocents into the war and the misery

Sh..(shit) of wild pouring, toxics waste in our seas and their pollution

Africa is not a trash can
Stop silent killings of man and women who,
For their lands rebel
African of heart or of colour, African from here, over there or somewhere else
From the North, the South, the East, the Western and the centre

It’s time to change the things by ourselves, to stop digesting the pill
It’s high time to act, ‘cause while the world goes on our Africa goes back
It’s time to write a new page of our history with a H majuscule
Let’s hinder that the history remains the same, never forget the horrible and tragic past
And the misdeeds and the worst, is that nobody came one day to apologize!
For all the wrongs that they inflicted us!
In the name of our people and our crucified forefathers
Brothers and sisters, we must resist!
Against the profiteers and the destructors, we need to fight our fears
Let us decide together to give a new and free breath to our Africa!
‘Cause a gesture, an objective glance, a reactive thought
Would be enough to raise this magic continent!

To believe that everything is possible as long as there is still the breath of life,
It is to preserve our future