Doin' it in the Park with Baloji & Secousse 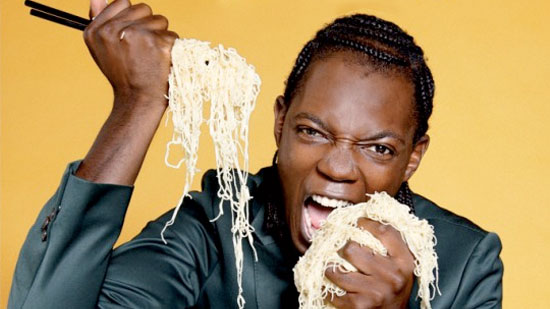 Africanhiphop.com & Tolhuistuin present the third edition of our annual festival Doin’ it in the Park 2011. Sunday August 28 (afternoon/evening) it’s going down in Tolhuistuin (Amsterdam, the Netherlands) with Baloji & l’orchestre de la Katuba, Secousse, dj Threesixty, Afro Som Sistema & many more!! Don’t miss – join the Facebook event page for updates and read on for the full program. 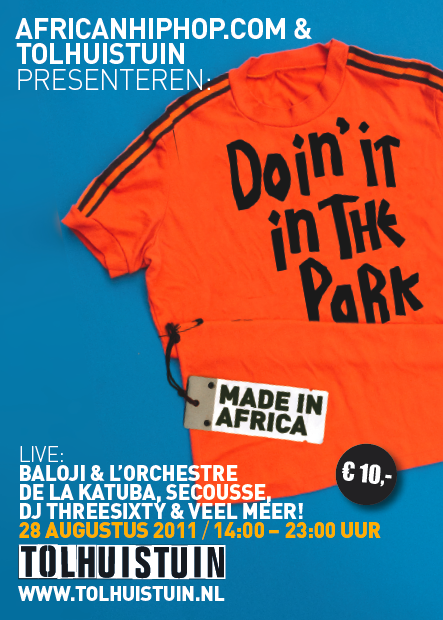 This year’s theme of the festival is Afropolitanism. A new generation is growing up in Europe and other places around the world, rooted in Africa but citizens of the world. Afropolitans (or Afropeans, as Baloji calls himself) don’t cling to old school stereotypes like ‘black’, ‘white’ or ‘mixed’ – they define and invent new modes of communication, new musical genres and fresh art. Doin’ it in the Park grew from this same school, and in its third edition we have a line-up that is testimony to the innovative space that the Afropolitans built.

The day kicks off with performances by four African Dutch acts including Gery Mendes (aka GMB, our African hip hop radio host representing Cape Verde), Thorough Borough Symphony (a collective of young talent led by Bamba Nazar aka dj Threesixty) and Salah Edin (NL/Morocco, giving a preview of tracks from his upcoming album)! They will be interviewed on stage about their work and what it means to be an Afropolitan. Deejays during the afternoon gigs are Afro Som Sistema. After this, the stage will be prepared for Baloji, dj Threesixty (African hip hop radio & Black Stereo), Secousse and host Quest One. Meanwhile, the Tolhuistuin gardens (a reclaimed city garden at the back of Amsterdam central station) are host to vendors selling the Doin it in the Park t-shirts, Africa is the Future gear, South African barbecue (braai) and more… and even if the weather is not sunny the extended dancefloor will remain dry.

Baloji & l’orchestre de la Katuba
At just over 30, Congolese born, Belgian bred Baloji already has a long musical career behind him. As a member of Belgium’s most popular hip hop group in the early 2000’s, Starflam, he performed all over Europe. In 2007 he embarked on a solo journey, recording an entire album in tribute to his Congolese heritage. ‘Hotel Impala’ was a collection of organic sounding grooves, produced in collaboration with a star studded set of musicians from all over the world. In the live tours that followed, Baloji and his band further perfected their blend. A series of concerts in Congo and a collaboration with Congolese musicians including Konono No 1 and Zaiko Langa Langa led to a reinterpretation of ‘Hotel Impala’, the semi live album ‘Kinshasa succursale’.
Currently touring with his band l’orchestre de la Katuba, Baloji has been the talk of the town in the past months. Africanhiphop.com previously invited him to play in Amsterdam on smaller gigs but this is his first full public show in Holland!

Secousse
The Secousse dj team is known from their releases as The Very Best with Malawi/UK singer Esau Mwamwaya and from tearing up the clubs as Radioclit. Their parties in Paris and other cities under the Secousse banner are the hottest in town, mixing new school uptempo African club tunes with evergreens (think of ‘Ekibis’ by Congolese singer Lutchiana) into a sound that is appreciated by a young generation. Together with dj/emcee Serpent Noir (Ivory Coast/France) they will grace Doin’ it in the Park with their mashup sound – first time in the Netherlands!