An Introduction to Zimbabwean Hip Hop 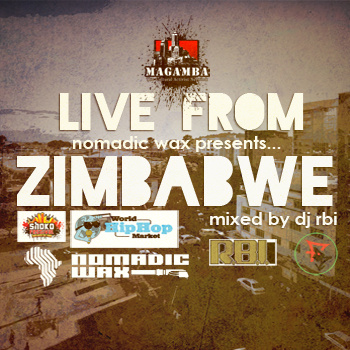 This just in from Nomadic Wax:

The hip hop scene in Zimbabwe is fierce, and also heavily slept on. Overshadowed by the scenes in its neighboring countries, it is only a matter of time before movements like Magamba Network’s Shoko Festival and the Book Cafe’s regular events are going to get the international exposure they deserve. We at Nomadic Wax have been working with hip hop from all over the world for many years now, but the scene in Zim has becoming one of our favorite scenes. Rich in diversity in styles, language usage, skills, and creative ways to be political in one of the more difficult places in the world to be an activist, Zimbabwean hip hop is ready to blow.

With the 2nd annual Shoko Festival taking place this week, the Zim scene has seen an unprecedented multi-year stretch of massive growth and increased exposure. To help create another access point for rest of the world into Zimbabwean hip hop, Nomadic Wax put together this little ‘Live From Zimbabwe‘ mixtape, providing y’all with a small window into one of the most underrated scenes on the planet. The mix is a celebration of dope hip hop, lyrical skills, and the impressive work that Magamba and the Shoko Festival are doing on the ground with youth and the arts. So enjoy the sounds as DJ RBI takes you on a musical journey through the streets of H-town and beyond. In addition, we put together this in-depth article on the scene and Shoko 2011. Get ready for this year’s Shoko festival from 18 to 23 September!

Stream or download from the Nomadic Wax Bandcamp page.